An allele refers to genes located at the same position on a pair of homologous chromosomes that control different forms of the same trait. They are the different ways a gene can take, each with its own sequences. It can manifest itself in specific modifications of the function of that gene.

Since most mammals are diploid, they have two sets of chromosomes, one from the father and the other from the mother. If two alleles of the same gene in the cells of an organism are the same, then such an organism is called homozygous. If the alleles are different, then the body is called heterozygous.

Although the term was originally used to describe variations between genes, it now also refers to variations in non-coding DNA sequences. 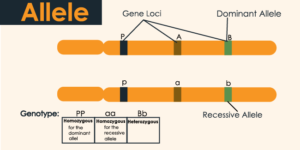 Types of allele and its examples

Let’s see the two types of allele dominant and recessive according to their expression in the phenotype.

Dominant allele: Those that appear in the phenotype of individuals. It expresses their effect even if the organisms only have one copy of the allele. If the allele is dominant, it will express in the child only with one of the procreating copies.  Genes that express most strongly are called dominant.

Let,s get more into detail.

In living things, the set of genes (called the genome) divide into molecules called chromosomes. In bacteria, relatively simple organisms, there is a single chromosome. Humans have 46. But it is not about 46 different chromosomes, but we have 23 duplicated chromosomes.

Alleles differ in their sequence and in that they can express in specific modifications of the function of that gene. That, the alleles produce variations in certain inherited characteristics, such as the color of the eyes, or the blood group (the allele being A +, B +, AB +, …).

Some other examples are follows.