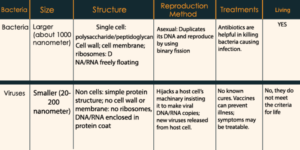 Difference between Virus and Bacteria in the column: