There is little to no difference between a wildlife sanctuary and a national park. To get aware of the few differences that exist, go through this article, You will surely get more interesting knowledge about these two terms. 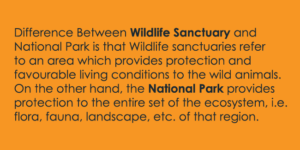 Wildlife Sanctuary and National Park, both terms are considered the same as both serve to retain or preserve the environment and wildlife of the earth.

watch the video also explaining difference between a wildlife sanctuary and national park:

The Difference Between Wildlife San... x

Difference Between Wildlife Sanctuary and National Park in points:

What is the difference between national park and zoo? A national park is a conserved place for nature or animals also including flora and fauna to save them from being endangered or from completely finished. While the zoo is a manmade place possessing animals in cages with the purpose of earning by showcasing them to the public.

What are the activities allowed in national parks?

More often the activities allowed in national parks are as follow:

What is Flora and Fauna?

What is Wildlife Sanctuary?

A wildlife Sanctuary or an Animal Sanctuary is a suitable isolated place as a shelter for animals that are in the red zone or are included in endangered species. Such animals are brought here to protect them from human hunting and are provided with the almost same environment as they are getting in the real wild.

Human tourism is not mostly not allowed in an animal sanctuary and the central aim of this is to instruct humans on how to well treat animals. Animals are given a natural habitat to let them grow in a natural way.

Following are the famous examples of wildlife sanctuaries in the world:

The Holy Hedge Wildlife Sanctuary located in the United Kingdom.

The Wood Stock form wildlife sanctuary in the United States.

The Chengdu Research Base of Giant Panda Breed situated in China.

The Elephant Nature Park in Thailand.

What is National Park?

A national park is a conserved/isolated place something like an animal sanctuary controlled under the National authority. It is also a man-made specified area to often include wild animals in it. Human tourism is not prohibited in the national park though it is aimed to conserve nature also in a natural way.

It protects unscathed civilized and natural assets and worth them for the purpose of inspiration, education, and enjoyment.

In the above article, we have studied a basic overview of the national park and wildlife sanctuary. Both are different terms but also the same at some points as well. Both are highly related to animals and nature and are highly important in today’s world to protect nature as natural assets are very much important for a country or a nation to survive.

you may also enjoy reading: