The human body typically contacts to millions of harmful pathogens everyday within 24 hours but still not get harmed by them, its just because of immunity it has.

A normal human body has two basic categories of immunity which are innate and acquired immunity.

The two can have a huge impact on a individual’s well-being but also come in a variety of visual functions. The most important distinction between them is the phase of their occurrences.

The main difference between both is that Innate is part of our DNA from birth, comes into play when our bodies are first exposed to pathogenic infections. In contrast, adaptive immunity is attained over time as the system is exposed to a wider disease variety.

This primary immune system function is to constantly halt the progression of pathogenic bacteria within the body. As a result, it has a fast and nonspecific method of action.

Another function relating to adaptive immunity for the long term is systematic identification of the root pathogen, which takes a lot of time. The results are specific but come later.

Innate immunity identifies foreign antigen but does not recognize it, thus the response only lasts for a brief period. On the other hand, adaptive immunity takes longer, because of its capacity to remember the pathogen,  the response is sustained due to the generation of memory cells. 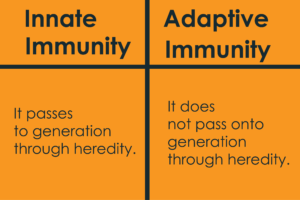 Sometimes a foreign substance is able to gain an advantage over our natural defenses. Therefore, a special targeting technology for killing the particular size bullet is usually required. This targeting technology is the Adaptive Immunity of our body. Acquired immunity, which has the appeared millions of years ago, was devised for vertebrate animals. Active immunity, which is not seen in lower organisms, is only unique in vertebrates. Adaptive immunity is not part of our biological systems at birth, and we develop it only gradually during the life span from exposure to different antigens. This exposure leads to the development of immune system receptors which participate fully in our defense against disease.

Some cells possess distinctive markers to identify the self-and non-self antigens. And to notify immune machinery to not attack those people who are self-. While telling it to give rise to a reaction against those individuals considered to be non-self. This wholly distinctive property is referred to as immune tolerance. Our immune system is there to safeguard our cells from bacterial or parasite assault. It could also block them from our own molecular assault. This situation may give rise to some autoimmune disorders like rheumatoid arthritis.

This is the biological response that an individual directly develops in response to a viral or parasitic stimulus. Here, the body generates antibodies either by an infection or by vaccination. While this process is very effective, it is a protracted method that generates antibodies to a particular antigen. It is a continuous and powerful immune response.

Passive immunity involves our intake of already made antibodies within our body. It provides an immediate deterrent for a disease’s spread. Antibodies are may need to be directly administered to an individual to obtain an enhanced immune response. Even though it’s a straightforward process, it can on occasion bring about issues as well.

How Does Innate Immunity Work

Our body keeps in contact with potentially hazardous, infection-causing agents regularly. Our body does not have time to pause and analyze the matter and then respond. Through that lapse in reaction, the threat might be strengthened and proliferate in an exponentially more overwhelming fashion. To guard against such a possibility, the body is equipped with an inborn defense mechanism, known as the innate immunity. This evolutionary biological immunity is present in nearly all multicellular organisms, including invertebrates. It is an immunity that acts as a first barrier line of defense in opposition to foreign antigens.

The very basic and important role of this immunity type is to stop the disease at the present stage and not allow it to move forward and make further immune damages to the body.

It does not allow pathogenic buildups and eliminate them altogether using its high spectrum responses.

The innate immunity prevents the entry of pathogens into our bodies. As this danger enters inside, our immune system focuses on halting its growth. As well as preventing the development of the infection, it also effectively dehydrates the cellular debris of the host and pathogen.

The response is complex and is generated by the pattern recognition molecule (PMR). These PMRs express a broad spectrum response towards foreign invasion. It strives to eliminate the foreign antigen. Thereby impeding the development of infection up until the development of specific adaptive immunity occurs.

To optimize adaptive responsiveness, innate defenses are crucial. Anatomical and physiological obstacles are present during the initial reaction phases. Phagocytic and inflammatory responses occur once the antigen enters. These second-stage responses lead to an adaptive immune response, as requested innate immunity time permits. An adaptive response is only feasible along with innate immunity provision of the time to recognize the antigen.

Immunity works as a protective measure against a certain amount of death by averting a wide range of diseases. This defense is of both innate and adaptive types. It’s present from birth and is composed of nonspecific and faster reactions. The adaptive one is attained by the body as exposure to antigens progresses. Prompt but slow reactions result from it.