Differentiation is the process by which a cell specializes, acquiring the ability to perform certain functions, and failing to develop others. It occurs by differential activation of some genes and the repression of others. It changes the function of the cell, its size, shape, and metabolic activity. 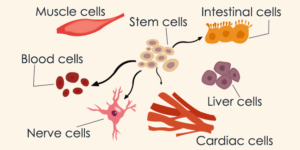 The differentiation of cells occurs not only in embryonic development but also in the adult body. It is very important but also a very complex process. It occurs multiple times during the development of a multicellular organism, as it changes from a simple zygote to a complex of specialized tissues and organs.

Cellular differentiation in animals and plants

The process of cell differentiation and development in plants and animals does not occur identically. In animals, movements of cells and tissues must occur for organisms to obtain a three-dimensional conformation that characterizes them. Furthermore, cell diversity is greatly higher in animals.

In contrast, plants do not have a span of growth only in the early stages of the individual’s life; they can increase in size all over the life of the plant.

Process: During the differentiation process, the cells undergo a series of changes in their characteristics and a readjustment occurs in their mutual relationships.

The main changes are:

Factors and characteristics of differentiation

Its characteristics are below

Another example, a monocyte develops into a macrophage, a promo blast develops into a myoblast, which forms a muscle fiber, forming syncytium. Division, differentiation, and morphogenesis are the main processes that ensure the development of a single cell (zygote) of a multicellular organism containing cells of a wide variety of species.

What are Undifferentiated cells?

For example, the phylogeny, meristem responsible for the formation of secondary protective tissues, originates from the dedifferentiation of epidermal and/or subepidermal cells.