Facts about octopus are so fascinating. You surely will enjoy reading them.

Octopus is a carnivorous marine creature that feeds on other marine animals. It lives deep in the ocean or on the ocean floor. It is a creature that mostly found in all oceans and prefers itself to hide in crevices, coral reefs, and in abandoned seashells.

An octopus possesses an eight-armed soft body with a globulous head. Its name ‘octopus’, is also inspired by ‘octa’ which means eight in Greek.

It falls in the kingdom: Animalia, class: Cephalopoda, genus: Octopus, and phylum: Mollusca, although it does not possesses the skeletal system in it. According to the WWF report, there are around 290 species of octopus exist. let’s have a look at some fascinating facts about octopus step by step. 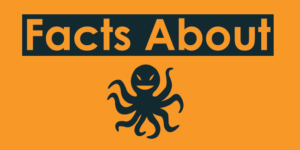 Most of the animals have blood in red color as we most familiar with, but the octopus has it in blue color. All this is due to the presence of a cuprous protein in the blood called hemocyanin.

It possesses three hearts, out of which, two work to supply blood to the gills while the other one is used to supply the blood to the rest of the body.

Octopus can swim swiftly, but it prefers to crawl at the seafloor. If it swims more, in that way its hearts that supply blood to the gills do bot function properly and it gets exhausted much quickly.

Octopus has a jelly-like extremely flexible body due to which it possesses the ability to squeeze & fits itself in small cracks present in the sea rocks or in seashells or crevices.

Octopus is a creature that has a very sensitive touch sense. The arms it has are very sticky which gives it a jaw like feature to capture anything. It has venomous saliva and also the suckers it has on arms can have a sense of taste.

Octopus has the ability to change its color according to its surroundings, it can change color in milliseconds and this feature is called camouflage.

Octopus has beak just the same as parrot’s beak. Octopus kill its prey by enclosing it into its arms and ingest it through the beak.

Octopus is an animal with a short life span. On average an octopus lives around only 6-months. In the case of a giant octopus, it lives around 5 or 6 years and dies. Octopus normally die after some months of mating.

It is one of the clever and intelligent marine animals. Due to its soft and jelly-like body, it can convert its shape to shapes like other animals.

Octopuses are good defenders of themselves. When they feel any danger around, they quickly release an ink-like liquid that does temporary blind to the attacker and confuses.

Octopus is a good learner, it observes other animals and takes actions accordingly.

Octopus is a poisonous animal. Scientific studies revealed that animals do not make their own venom, there are symbiotic bacteria which do it.

They have a large brain and have a well-developed central nervous system. Also, they have 500 million neurons in them. All this makes them intelligent enough and touch and taste sensitive.

These are some facts about octopus, I hope You enjoyed these.