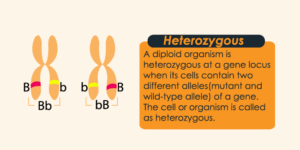 The term heterozygous describes the genotype of a diploid organism at a specific locus in its DNA. A genotype in which two different allelic genes are represented: dominant and recessive. The phenotype of a heterozygous organism, as a rule, determine by dominant alleles.

Such as one gene that gives a plant a high size and the other gives a short size.

Let,s talk more about it.

A good example to understand what it means is that people who have type AB blood are heterozygous.

How the dominant and recessive genes interrelate, it might involve:

Incomplete dominance is when the appearance of the first generation is intermediate between the phenotypes of the two-parent varieties. In this dominance, the heterozygote phenotype is different from the two homozygote varieties. Therefore the genotypic and phenotypic ratio is 1: 2:1.

It occurs when different alleles represent individually but different parts of an individual. Codominance is different from incomplete dominance. In this, both traits represent equally. For example, codominance is the inheritance of blood group characteristics A and B in the AB0 system.

Dominant diseases are as follows;