Homozygous (homozygote) a diploid organism or cell carrying the identical alleles of a gene in homologous chromosomes ( AA or aa ). In genetics, of a pair of chromosomes having, in the corresponding points, two identical genes. Consequently, the production of gametes equal to that character occurs. 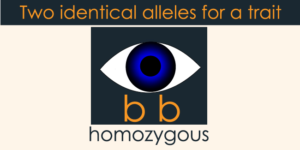 Whenever the cell duplicates its genetic heritage, DNA condenses into chromosomes. The number and shape of these chromosomes for each species are almost constant and in all cells of the same organisms is equal.

In a homo-zygote, alleles at a locus are equal to alleles on the homologous chromosome.

A homozygous recessive genotype arises when the sequence spans two alleles of the recessive attribute. It is a pair of double recessive genes at the same locus. When an individual has two equal recessive alleles for a single gene; a recessive homozygote has a unique phenotype. Therefore, immediately identifiable.

Since each individual compose of cells containing all the same genetic patrimony.

Now let’s talk about its example and diseases.

Examples and diseases of homozygous

The examples of homozygous are as follows:

Following are the diseases of homozygote which more effect people: