Microscope is a revolutionized scientific instrument which is used in research laboratories to examine the small objects that are not clearly visible and can’t be seen by the naked eye. They are derived from Ancient Greek words “mikrós skopeîn” as mikrós means “small” and skopeîn mean “to look” or “see”.

Microscopes are frequently utilized to research the fungi, microscopic algae,, and other minor life forms. It has its own magnification power and made up of lenses for the magnification. It depends on the type of the lens that it will increase the illustration according to its focal strength. They can see the very small objects and distinct their structural differences, for example the view of the plant and animal cells, viewing of the microscopic bacterial cells.

Microscopes are usually made up of basic parts for holding and supporting the whole body of it and its components and the ocular parts which are used for magnification and viewing of the sampling images.

This Instrument make objects such as cells, microorganisms, viruses, and microorganisms visible to human eye by making larger enough images, so they can be examined and researched.

Types of the Microscope

However, the optical for of it is one the most common and famous type. 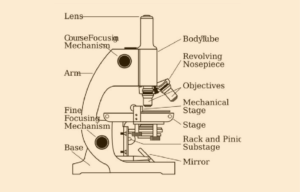 There are three different structural parts of this optical device

Head is also known as the body of this machine as it brings the optical parts in the upper part of the microscope.

It support the whole apparatus body, and brings the microscopic incandescent light.

Some high-quality microscopes have a segmented arm with more than one joint. It allowed more movement of the microscopic head for high quality viewing.

Optical parts and the functions

The optical parts of the microscope are used to view, enlarge, and produce an image from a sample placed on a slide. These parts include

Eyepiece also contains ocular lens. It enhance the image of the viewer. This part is used for checking through the microscope. Eyepiece is found at the upper part of it. Its standard magnification is 10x with an optional eyepiece and having magnifications from 5X to 30X.

It’s the eyepiece holder. It brings the eyepiece directly above the objective lens. Some binoculars have eyepiece tubes that can be easily rotated to achieve maximum magnification. For monocular microscopes, they are none flexible.

Three are 3 or 4 objective lenses on a microscope .These are the some main lenses that are used for specimen visualization. They have a magnification power of 40x-100X. There are about 1-4 objectives lenses attached to one microscope, in which some are front-facing and others are opposite-facing. Lenses have differing magnification Capacities.

This is the segment in which the specimen is placed for viewing. The slides are held in place with clips. As the mechanical stage the most common stage, which allows the control of the slides by moving the slides using the mechanical knobs on the stage instead of moving them manually.

There is a hole on the stage of the microscopes. The transmitted light reaches through this to stage.

It is the microscopes light source, located at the base. It is used instead of a mirror. It captures light from an external source of a low voltage of about 100v.

These lenses that are used to collect and focus light from the illuminator into the specimen.

It controls the light that passes through the specimen.

It provides light for viewing the specimen.