What is the nucleus: It is a membranous organelle found in the center of eukaryotic cells (not prokaryotic cells, where there is no nucleus). It contains most of the cell’s genetic material, organized into DNA macromolecules called chromosomes. In some cells, the number of nuclei may be more than one.

It is the most important structure within animal and plant cells. It is the main control center in the cell and it is considered the brain of the cell. It is one of the fundamental organelles of the cell, essential to achieve high levels of complexity in life, as we are multicellular beings. 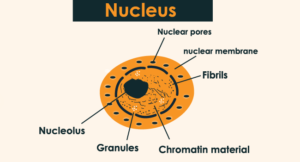 What is the nucleus structure and function?

What is the nucleus structure? It is a large structure surrounded by a double membrane, the nuclear envelope, which separates it from the cytoplasm. The membranes merge in a few places, leaving openings called “nuclear pores”, allowing the exchange of molecules between the nucleus and the cytoplasm.

The nuclear envelope is in continuity with the granular endoplasmic reticulum, which is therefore stuck to the nucleus.

The nucleus functions are as follows:

The nucleus function in the plant cell is to maintain the integrity of genes and to control the cellular activities that regulate gene expression. It is the one that governs cellular activities. It controls the production of enzymatic proteins in the cell is. For this, it uses the mRNA.

Characteristics of the nucleus are:

The basic difference between the nucleus and nucleolus is that a nucleus is a cellular organelle, which stores genetic information in the form of a DNA molecule while a nucleolus is the part of it in which the synthesis of ribosomes, chromatin, and nucleoplasm are synthesized.

Cytoplasm is the space in cell where all the organelles of the cell are located and doing their pre-defined jobs. We can also define it in such a way that cytoplasm is the cavity inside the cell which is holding all the cell organelles. Have a look at the picture below and You will get the whole idea about it.

You must heard about the ‘cytosol’ and You probably confused about it. The cytoplasm is the cavity that is holding organelles of the cell, but in this cavity, there is a gel-like fluid present which is actually the main reason for the better and firm holding of cell organelles.