The difference between Cerebellum and Cerebrum is so simple. These are 2 separate parts of brain that are different from each other on the basis of their size & places where they are located. the upper largest walnut-like part of the brain is called Cerebrum WHILE Cerebellum is small & present beneath the cerebrum.

The brain is a very important organ of our body. It is a very complex and smart organ of the body which works as a central processing unit. A human can survive without a kidney but cannot survive with a single part of the brain missing. It works 24/7 to control our body even all the body parts are dependent on the brain.

Difference between Cerebellum and Cerebrum side-by-side:

Where is the Cerebellum located?

Where is the Cerebellum located: The Cerebellum exists exactly under the largest part of the brain which is the cerebrum. It is a component of the brain that is comprised of a single piece and has a shape like a tree. It possesses about 10% weight of the total brain’s weight.

Where is the Cerebrum located?

Where is the Cerebrum located: it is located at the upper side of the brain directly facing the skull bone. It is the largest component of the brain which is further comprised of two parts, left-hemisphere & right-hemisphere and has a shape like a walnut. It possesses about 80-85% weight of the total brain’s weight.

Difference between cerebrum and spinal cord:

Furthermore, cerebrum is the giant brain section possessing two hemispheres and it operates on different thoughts or emotions. Spinal cord is the CNS section that operates on impulsive signals to and out from the brain. Spinal cord also deals with carrying integrative, sensory, and motor functions to help impulses transmit to the brain.

What is cranium what is its function? Cranium is a pure medical terminology which means the skull or in simple words cranium means skull. It is employed as a defense or a shielding to the brain & face or almost all the sensitive top human body organs. It is a tough structured bone serving as a helmet. 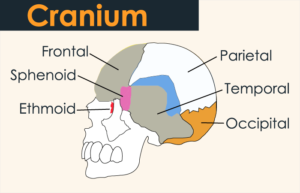