Tiny blood cells that help your body form clots to stop bleeding are called platelets. These are small pieces of cytoplasm that are shed from the cytoplasm of mature megakaryocytes in the bone marrow. They play an important role in coagulation, a very complex phenomenon. 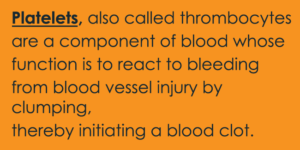 The platelets play a central role in the development of vascular calcification or vascular occlusions such as the heart attack.

When platelets are too high:

When platelets are too low:

The function of Platelets:

The main function of platelets is to coagulate and stop bleeding, and repair damaged blood vessels. These are important for blood clotting because they stick together in the event of vascular injuries and form a graft at the injured area and become a cause of stop-bleeding.

When the blood vessel is damaged or ruptured, the platelet stimulated, changing from the stationary phase to the functional phase, and immediately deforms.

If there are too few platelets in our blood or if these cells do not function properly, there is an increased tendency to bleed. This means that in the event of an injury, you bleed longer and more. If the platelet function is highly disturbed, bleeding can occur without an external cause (so-called spontaneous bleeding).