What is mitosis: It is a process of cell division, as a result of which two daughter cells with the same set of chromosomes are formed from one mother cell. It occurs in somatic cells, either diploid or haploid. The division of the cytoplasm is called cytokinesis, and the division of the nucleus, karyokinesis. 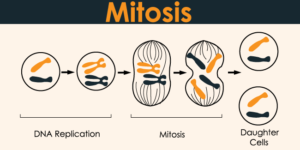 Mitosis is the most common form of asexual reproduction of eukaryotic cells, that is, those with a nucleus where their complete genetic material resides. The primary role of mitosis is, of course, cell multiplication, but also the intact preservation of genetic information, through identical copies (clones).

What Is Mitosis interphase?

Mitosis interphase: The first phase supposes a momentary suspension in the cell’s tasks, while the cell dedicates its energies to duplicating its content: duplicating its DNA chain, duplicating its organelles, to have twice everything before division. It is divided into phases G1, S, and G2.

What are the Stages and Examples of Mitosis?

There are four stages of mitosis, which are as follows:

What is cytokinesis: when the mitosis or meiosis occurring there is the division of DNA material into two pieces. If we notice that DNA is residing in the nucleus of the cell, but when the DNA gets divides, ultimately the nucleus has to be divided into two in order to make two new coverings on the divided DNA.

If You notice the picture above, before the formation of two daughter cells which is the last step in that. there is cytokinesis occurring.

Why is mitosis important?

Why is mitosis important: It is vital in the growth and development of multicellular organisms. It enables the transmission of all genetic information in each of the resulting cells. It forms the basis of forms of asexual reproduction. It also ensures the continuity and stability of the species.

Reproduction of an identical cell is possible only through this. In this way, skin cells, intestinal epithelium, red blood cells whose life cycle is only 4 months, are replaced. With the help of this division, the regeneration of parts of the body in some living organisms is possible.

What are mitosis and meiosis?

What are mitosis and meiosis: Mitosis is a procedure in which cells multiply and that has a great impact on the growth, development, and regeneration capacity of the organism while the meiosis is rather defined as a process of reproduction sexual because it takes place in the reproductive organs.

Where does meiosis occur?